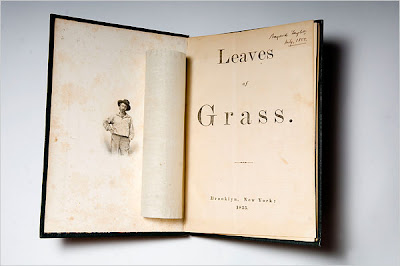 It was during this event that Emory took the wraps off what some say is the most important collection of English-language poetry in the world.

It was the first public display of the fruits of the Raymond Danowski Poetry Library which they acquired in 2004.

The 75,000 rare books, posters, periodicals and recordings that make up the collection is “a nearly complete record of all published English-language poetry in the 20th century.”

I repeat “a nearly complete record of all published English-language poetry in the 20th century.”

The library arrived in 1,500 boxes and tea crates, and is still being processed!

The exhibition is titled “Democratic Vistas: Exploring the Raymond Danowski Poetry Library,” and features 250 jewels from the collection including:

-A magnificent copy of the first edition of Walt Whitman’s Leaves of Grass. (1855)

-one of 11 known copies of William Carlos Williams’ first book, Poems (1909), which was never reprinted

-a first edition of T. S. Eliot’s “Prufrock and Other Observations” (1917), inscribed to his close friend Emily Hale;

Danowski has provided a 24-page handwritten introduction to the archive, titled “Anything you perhaps don’t recognize, please Google.”

« A New Dawn at the Library of Congress
AbeBooks to Buy Chrislands »
About the author: Michael Lieberman