Outlined in ink and filled with a deep crimson oil paint, the words “PAST STUFF” have been hand-painted on the front cover of the third volume of Ed Ruscha’s Catalogue Raisonné of the Paintings by Ruscha. Underscoring this work’s unique quality, traces of the brushstroke are visible in the paint, and the hand-painted letters have wavering borders. A red censor-like block has also been painted over Ruscha’s name on the text’s spine.

The goal of the Pen American Center is simple and to be supported at all cost:  To defend freedom of expression and to celebrate the literature that such freedom makes possible.

To further the cause seventy-five writers and artists have contributed work to First Editions / Second Thoughts, an auction to be held at Christie’s on December 2 to benefit the Pen American Center.

This is much more than an auction of first editions donated by their authors.  It is a gathering of unique copies of important works. “Through annotations including notes, essays, drawings, photographs, letters to the reader, and inserted memorabilia, each contributor has transformed a first edition of a classic work into a distinct new artifact for one lucky buyer.”

If you collect one of these authors/artists or inscribed copies or Modern First Editions this is where you dip into the piggy bank. The speculation is removed and you are presented with a unique opportunity. And best of all you support an organization that is committed to preserving the foundation from which these works arise. 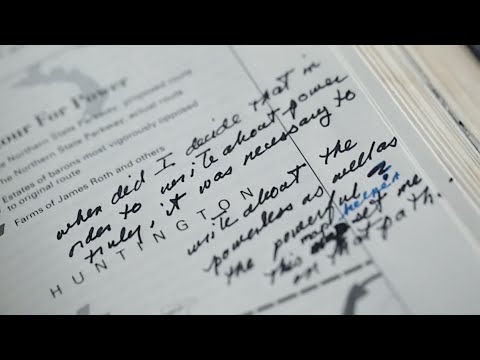 The New York Times featured the auction in T Magazine and offered this video of  Robert A. Caro, Paul Auster and Jane Smiley reflecting on the process of revisiting their past works.

« After years of military rule books and hope are returning to Myanmar
chromapoems: Text Visualized »
About the author: Michael Lieberman

MUST READ: Tablets in prison sound great. But: $15 for each novel. 3 cents/min. 25 cents/page. Reading is now yet another profit companies extract. Yet "a charge to read is especially egregious. The great resource in prison is the time to think & improve."https://www.usatoday.com/story/opinion/policing/spotlight/2020/02/03/books-helped-me-get-through-life-sentence-fees-rob-others-benefit/4569506002/