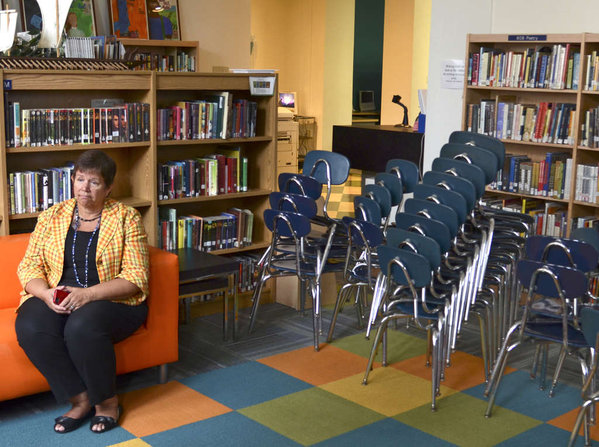 In one week we have helped raise over $300,000 for the Ferguson Public Library.  The outpouring of support has been epic and a wounded community has been guaranteed a safe place to turn to in its time of need.

Now we must turn our attention to the public school libraries of West and Southwest Philadelphia. Here in its entirety is an op-ed that ran in the Philadelphia Inquirer last Sunday and it begins like this:

“In 1991, there were 176 certified librarians in Philadelphia public schools. This year there are 11 and only five are known to be actually doing what they were trained to do. Five librarians for the nation’s eighth-largest school district.”

More than 80% of Philadelphia public schools lack a functioning library. Some 40% of students will drop out of school without graduating, and a child’s reading ability at the end of third grade is a key predictor of dropout risk.

This a complete tragedy and an absolute travesty. Can you imagine your kids going to a school without library?

to promote childhood literacy by engaging volunteers in Philadelphia public schools through re-opening and staffing libraries and academic mentoring. In our vision, every Philadelphia student will be empowered with the literacy skills vital to the success of the child and the prosperity of our community

They have opened 17 previously closed elementary school libraries, and are currently running 12 libraries in West and Southwest Philadelphia  and they funded entirely by private dollars and provides all of its services at no cost to schools or to the School District of Philadelphia.

We came through during Thanksgiving for the people of Ferguson now let’s come through for the kids of Philadelphia this holiday season. Donate here.

School libraries are essential for learning.

In 1991, there were 176 certified librarians in Philadelphia public schools. This year there are 11 and only five are known to be actually doing what they were trained to do. Five librarians for the nation’s eighth-largest school district.Leaving Philadelphia’s public school libraries without professional staffing is a grave mistake. It will have consequences for the students for the rest of their lives. Study after study shows a clear link between school libraries staffed by certified librarians and student achievement.

In 2012, research showed that students who had school library programs and certified librarians were more likely to have advanced reading and writing scores on the Pennsylvania System of School Assessment (PSSA) tests. And they were less likely to have “below basic” scores.

The same study found that school library programs have their greatest impact on students who are economically disadvantaged, black, Hispanic, or have disabilities. African American students in schools with certified librarians are twice as likely to earn advanced writing scores as those in schools without librarians.

A Mansfield University paper that looked at studies done in 23 states verified that schools with a trained librarian – someone who teaches students and works with teachers to develop information and research skills – have a consistent positive effect on student achievement regardless of demographic and economic differences among students.

Here’s a quiz. Which of the following are required by Pennsylvania to have libraries and certified librarians:

(a) barber and cosmetology schools,

The answer is all of them, except for public schools.

Many people apparently believe that libraries are an educational frill. This puts libraries in the crosshairs of budget cutters. But those who think that the Internet replaces a library must think it is OK to use WebMD instead of going to a doctor. Librarians teach information literacy – how to separate the useful from the less useful and how to navigate the Internet safely.

Despite public perception, not all students have smart phones, up-to-date computers, or access to the Internet. According to the U.S. Department of Commerce, 46 percent of households with incomes under $25,000 cannot afford home Internet service. Fifty-three percent of urban households in that same income group do not own a computer.

School libraries provide these 21st-century necessities with a supportive guide in the person of a certified librarian to teach and assist students. Without a librarian to manage things, Pennsylvania’s POWER Library databases and e-books, to which every school has access via licenses to digital resources provided by the commonwealth, go unused. Without a librarian to keep the technology and collection up to date, books start disappearing. Classroom teachers stop using the library. After a while, as has happened in so many Philadelphia schools, the library becomes just another classroom.

Parents don’t want this. Eighty-one percent of parents say libraries are important for their children because they offer resources and access to information that they can’t get at home, according to the Pew Research Center’s Internet and American Life Project.

The bottom line is that school library programs and certified librarians positively impact student achievement. And their absence results in poorer readers and writers. The research is clear and compelling. Pennsylvania should require all public schools to have libraries and certified school librarians as essential components for learning.

To deny our students access to this is to place upon young people a hardship and disadvantage that will position them behind millions of their peers, not just here, but globally.

Carol Heinsdorf is a retired, certified librarian who represents the Alliance for Philadelphia Public Schools. cheinsdorf@gmail.com

Many thanks to Debra Kachel for permission to reprint.

Previously on Book Patrol:
The Ferguson Public Library as an epicenter of healing

« Publish what they like and they’ll read them: What Kids Want in Books
Book Patrol’s Favorite Books of 2014: Part 2 »
About the author: Michael Lieberman

Sixty years ago this week, on August 12, 1960, #DrSeuss published what would become his best-selling book of all time. Written as the result of a $50 bet between Seuss and his publisher Bennett Cerf, it has since sold more than 8 million copies.

A Bookstore That Shines as ‘a Lighthouse of a Free Society’.
https://www.nytimes.com/2020/08/09/world/asia/taiwan-taipei-Causeway-Bay-Books.html

The Empty Nesters Who Run a Bookstore—And Live Together.
https://www.theatlantic.com/family/archive/2020/08/bookstore-run-two-best-friends/615004/?utm_source=feed