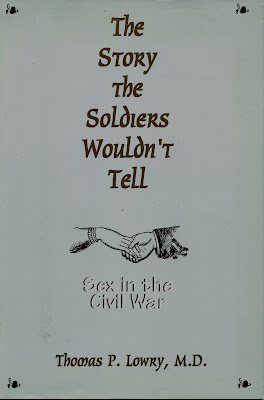 Johnny Reb and Billy Yank had a secret life, one that they and their families tried to hide from posterity and Ken Burns.

They largely succeeded. Most men left no record of their sexual activities, or if they did, their survivors expurgated or expunged the record through destruction; the reality was a bit too seamy for pure sensibilities, legacies needed to be protected. Reports of wild times and venereal disease were not likely to be appreciated by descendants.

Thus the Civil, our most holy, War, ennobled at the time and forevermore as a moral cause by both sides, has been stripped of that most human and earthy dimension and instinct. War is a rite of passage for all young boys and men, and leaving home for the first time, to a large degree innocent and inexperienced, they often become unmoored from traditional, peacetime standards of moral behavior and drift into those of wartime, which is to say, the world turned upside down and violently shaken.

But in a volume that might otherwise be buried deep within the annals of weird books, The Story the Soldiers Wouldn’t Tell: Sex in the Civil War (Stackpole, 1994), Thomas Lowry, M.D., addresses and fills, through diligent, original research that at the time of the book’s publication unearthed a wealth of new material, that lacuna in the military record. Collectors of general military history, Civil War, or sexology literature should consider adding it to their shelves.

“There is a whole city of whores. Yes, father, a whole city. They have laid out a village to the east of where the railroad bends to the docks” (Young worker in the Sanitary Commission, City Point, Virginia, 1864).

“There has been a bonfire in the rear of my tent, burning up a large quantity of obscene books, taken from the mails” (Marsena Patrick, provost marshal general of the Army of the Potomac, June 8, 1863).

Those who follow modern shenanigans within shorts inside the Beltway will be unsurprised to learn that, according to file Volume 298, RG 393, Register of the Provost Marshall, 22d Army Corps, in 1864-65 there were seventy-three bawdy houses in Washington D.C. to service our servicemen. The register notes names, addresses, number of “Inmates,” and “Class,” i.e. 1 is best, 2 is fair, 3 is poor, and “low” is bad. Most houses had from 1-5 women in their employ, and earned a “1`” or a “2.” Mary Taylor, however, had six girls working for her; her brothel was, however, rated “”low.” One house stands out amongst all the others. Elizabeth Harley, at 4 Maryland, Island, ran a #1 rated brothel, apparently the city’s high-end, big-box flesh retailer, featuring eighteen women.

The register also lists “coloured” bawdy houses. Of the twelve noted, only two brothels were rated #1, with two and five workers. Four were rated “low,” one of which, Josephine Webster’s Fighting Alley, employed twelve; a cheap crib house that earned its name.

Poor John B. Fletcher. In his diary we learn that, headed north to home by steamboat in 1863, he is waylaid by temptation in Memphis; her name is Woman. His resolve to get back home as soon as possible is foiled by too much funnin’.

Dec. 14th. Dwight and myself went to the theatre last night. Had a good time. I hardly know when I shall start up the river.

Dec. 15th. It’s a pleasant kind of day. Indeed I must start up today or tomorrow without fail.

Dec. 16th. I’m still with Dwight. I am enjoying myself very much.Dec. 17th. A very cold kind of morning. Dwight and myself went to the theatre last night. Had a first-rate time. I should go up the river in two or three days.

Dec. 18th. It’s a very pleasant morning. I intend to leave here tomorrow without fail. Had an introduction to Miss Annie Renney.

Dec. 19th. I have not gone yet. Shall go on the first boat. Spent the afternoon with Annie Renney. FXXXX good. Had a first-rate time.

Dec. 20th. I had a first-rate time last night with Annie. FXXXX good. I do hope there will be a boat going up today. I am very anxious to get north.

Of course he is. One more night with this war’s Memphis Belle and the poor guy’s a goner.

On June 27, 1863, the 14th North Carolina Regiment captured a large supply of Yankee whiskey at Carlisle, Pennsylvania. A musician in the regiment’s band (band musicians, then as now, traditional suspects in matters of vice) reported that “some of the Pennsylvania women, hearing the noise of the revel and the music, dared to come near us. Soon they had formed the center of attention and joined in the spirit of the doings. After much whiskey and dancing, they shed most of their garments and offered us their bottoms. Each took on dozens of us, squealing in delight. For me it was hard come, easy go.”

Prostitution and war are nothing new. It is comforting, however, to discover that the years 1860-1865 in the U.S. were not simply a long, bloody exercise in ideals and righteousness, however justified.

There are virtually no records of homosexual offenses being prosecuted in the military at the time simply because the word “homosexual” did not exist in the English language until 1895. Yet homosexual behavior did occur; statistically, it was inevitable. Lowry discusses it at length.

Lowry, a doctor and historian who earned his M.D. at Stanford, served in the U.S. Air Force, and was on staff at the Masters and Johnson clinic 1972-73, also discusses the incidence of rape, venereal disease, contemporary pornography, officers who were not gentlemen, and other aspects of sexuality during the war.

No social (history of the United States would be complete without a look at the clergy down and dirty. Modern examples of moral hypocrisy within the ranks of religious authority figures are found in abundance, with the commandment to “be fruitful and multiply” taken to extremes much appreciated by late-night comedians. Lowry recounts the stories of a few clergymen who notoriously tended to their flock with their pants down.

You are forgiven if you’ve never heard of the Very Reverend James Cook Richmond, an Episcopal priest, evangelical, and chaplain to the 2d Wisconsin Regiment of Infantry Volunteers. He was in the public ai ai ai! in 1863.

Seems he developed an obsessive erotomania for Miss Rosa Bielaski, a copyist working in the Treasury Building in Washington, D.C., and sent her a series of letters that became increasingly and compulsively obscene. Beginning in April, by May the unwelcome missives had become desperate epistles with four-letter pleas to wet his whistle, written in a frantic scrawl and illustrated with exceedingly graphic sexual imagery.

A military investigation concluded that Rev. Richmond was “a really wicked, lewd man and probably insane,” and recommended that he be dismissed from the Army and placed in ”an insane asylum.” Yet he, like so many modern members of Congress of similar temperament and mental state, was simply asked to leave the shining city upon a swamp. Only a week later, he spoke at a rally of his work in “driving the devil out of Washington”; he did not, apparently, require the services of a chauffeur. But the lesson was not learned: Three years later, Rev. Richmond was murdered by the sharecropper who worked his farm. Richmond’s offense? In yet another ongoing fit of erotomania, he had called the man’s mother and sister black strumpets and whores; he had, it seems, experienced their reluctant charms.

It would be a mistake to conclude that all sexual matters during the Civil War were seamy. There is much tenderness and depth of feeling in much if not most correspondence between soldiers and their wives or betrothed. It sometimes belies the notion that decent, God-fearing 19th century middle class American women were not capable of sexual passion and satisfaction.

In a letter dated November 25, 1863 to her “dear and intended husband,” Julia Higgins of Mills Springs, VA writes with great yearning for her fiancé:

“I love you with all my heart and with all my mind and long to see you Dear Jim. My mind dwells on the treasures we will have when you come back, embracing each other on the sofa and bed. I never felt so good as I did the first time I laid on the sofa. I wish it would last – always it is my daily thought to think of you and the good feelings we will have when you come home. You must not let anyone see this letter. Lay it next to your heart.”

It is a letter that stands as testimony to the foolish reasons men go off to war and the only noble goal that remains after ideals are shattered by grim reality: To get home alive and in one piece to rest in the warm, naked embrace of one’s love. It is a tender, aching, intimate battle hymn of the republic.