We do not believe in the treatment of books as a  commodity, we do not list our books at Amazon or their subsidiary AbeBooks 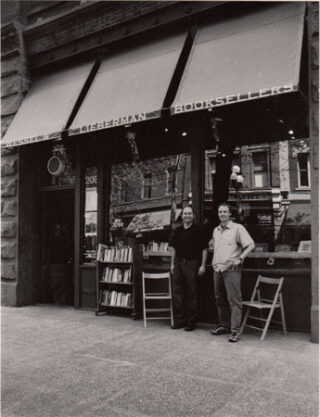 Book Patrol was founded in 2006 by Michael Lieberman. Lieberman founded Wessel & Lieberman Booksellers (1993-2014) in Seattle and from 2016-18 managed the book collection at Folio: The Seattle Athenaeum.

All books offered for sale are guaranteed as described and shipped with care.

Looking to build a collection or need help dispersing a library? We can assist.

Looking for a gift? We offer expert gift services.

photo by Mary Randlett. Michael on the left, Mark Wessel on the right

BP in the media:

Michael has served on the boards of the Friends of the Seattle Public Library, The Book Club of Washington and the Antiquarian Booksellers Association of America. He has also been a member of the National Book Critics Circle and a proud community representative for the Digital Public Library of America.

He was born on May 10th. The day, in 1933, the infamous Nazi bibliocaust took place.

When not reading, playing with or writing about books Michael is hanging out his my wife and two kids in the Emerald City.